Volunteers searching for seed heads amongst the grass - Gabby King

The latest news from our reserves. This week we've been harvesting fritillary seeds, found a robin in the workshop, and seen moths, butterflies, orchids and more...

The meadows and heaths volunteer team have been harvesting snake’s-head fritillary seed to spread on a neighbour’s meadow to try and extend their local distribution. 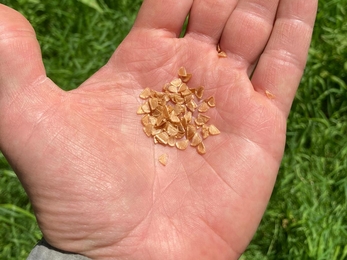 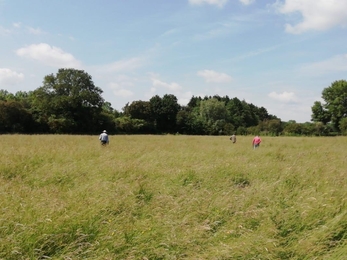 Volunteers searching for seed heads amongst the grass - Gabby King 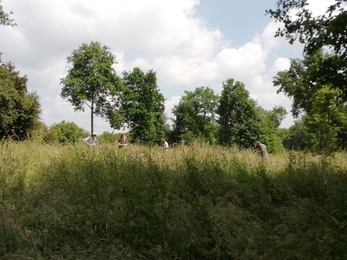 This young robin is looking particularly calm and at ease as his parents made their nest inside Lackford Lakes team workshop.

This distinctive moth is found in habitats where their foodplant of thistles grow, like this one snapped at Fox Fritillary Meadow by volunteer Nick Mason.

Here’s a lovely pyramidal orchid, also seen at Fox Fritillary Meadow. Orchids have a symbiotic relationship with a mat-forming fungus, as their seeds do not store enough food to grow on their own, so they team up with the fungus in the soil. In turn, the orchid’s roots protect the fungus.

This perennial plant, from the pea family, was commonly grown as a fodder plant from the seventeenth century onwards, until the introduction of chemical fertilisers in the 1950s. Sainfoin flowers grow in densely packed racemes, with upright hairless hollow stems growing to around 40cm tall. It has alternate, pinnate leaves, similar in appearance to those of a vetch. It is highly palatable to livestock; as well as helping to prevent parasitic worm infections in cattle it also reduces methane production. Its name, from the French, translates as 'healthy hay'.

Alex Lack, Bradfield Woods Assistant Warden mentioned how particularly obliging this individual butterfly was to his attempts of photographing it for this week’s news roundup. Male large skippers are most often found perching in a prominent, sunny position, usually on a large leaf at a boundary between taller and shorter vegetation, awaiting passing females. Females are less conspicuous, though both sexes may be seen feeding on flowers, bramble being a favourite. Males have a thick black line through the centre of forewing. Undersides have faint orange spots unlike the bright silver spots in silver-spotted skipper.

The presence of a faint chequered pattern on both sides of the wings distinguishes this species from the similar small and Essex skippers, which fly at the same time. The large skipper is widespread in southern Britain and its range has extended northwards in north-east England since the 1960s.

This delicate plant is currently in flower at Trimley Marshes. Also known as grass pea, it is not a grass but a member of the pea family.

The intense magenta flowers of common hedge nettle, betony is first referred to in a work by the Roman physician Antonius Musa. He claimed it was effective against sorcery.

This week, our reserve teams spotted a bittern in flight, an inquisitive purple emperor, a shiny dor beetle, frisky ponies as the hay…

This week, the reserve teams have been busy making hay while the sun shines across our marsh and meadow reserves...

This week, our reserves team have been counting orchids, marvelling at ants nests, finding beautiful butterflies and carnivorous plants…