Ipswich Hedgehog Officer
The last few months have been very intense but very fun. Our Hedgehog Officer Ali alongside the help of our two hedgehog interns, colleagues and many volunteers, have been running a hedgehog population study in North West Ipswich for Nottingham Trent University.

Firstly, I wanted to say a massive thank you to everyone that has been involved – the 120 garden owners in North West Ipswich and all the volunteers that have helped me with the study along the way. For those of you that haven’t been involved, I thought I would tell you what we’ve been up to here in Ipswich since March.

There are several methods currently used for detecting hedgehog presence, but estimating hedgehog population densities are difficult because current methods have either low detection rates or can’t be used across all habitat types. This study is part of a larger project being conducted across the UK by Nottingham Trent University to try and rectify this issue. Our 1km2 site in Ipswich is just one of many sites that aim to validate a method for estimating hedgehog population density using a Random Encounter Model. The model relies on trail cameras being randomly distributed across a study area, using data on camera detection rates, survey effort, area covered and distances animals have travelled. So to get started, at the beginning of April off we went to our study area to get randomly selected garden owners on board. After lots of door knocking, persuading and garden visits (to check they had suitable hedgehog highways!) we managed to get our 120 gardens lined up and ready for the trail cameras to be installed!

But before we started installing cameras, we needed to get an independent estimate of hedgehog density in the study area. To do this, we conducted night surveys to capture, mark and recapture hedgehogs. This estimate would be used to compare to the estimate achieved using the Random Encounter Model. All catching and marking was done under license – we marked 28 individual hedgehogs and tagged six with GPS/radio transmitters. These surveys relied on us becoming nocturnal – from 11pm to 4am off we went clad in high-vis, walking our transects to see how many hedgehogs we could encounter. Whilst many hedgehogs, as you might expect, curl up in a ball upon being seen, some where actually incredibly speedy. I definitely hadn’t been expecting to run after a hedgehog! Each hedgehog under went a health check before being given a small unique mark (small coloured straws on some of their spines!), and we were reassured by the good health of the hedgehogs we were encountering.

Now there were hedgehogs wandering around the study area with radio tags, our job was to relocate the hedgehogs for health checks and tag removals. We got lots of funny looks with the very large radio tracking aerial – and I’m not surprised. The best suggestions were that we must be tracking aliens, ghosts and houses without TV licenses.  We were rummaging around in lots of bushes (to check up on tagged hedgehogs in their day nests), and generally looking a little odd.

The next stage of the project involved contacting the 120 garden owners that had agreed to take part, so that we could set the cameras up and start collecting more data. This involved watching lots of video clips of hedgehogs, cats, dogs, foxes and the odd mouse and rat, and taking lots of measurements. We got some lovely footage of courting hedgehogs, bouncing foxes and a rather amusing clip of a hedgehog falling down a step (pretty sure it survived the ordeal!) It was lovely to see how over-joyed garden owners were to discover hedgehogs using their gardens.

We were very lucky with the weather and on many occasions had glorious sunshine. We were even treated to boxes of chocolate, home made cake and fresh lemonade – luxury! Of course we did luck out on a couple of days and had to tuck under large umbrellas to save the laptop from the rain! 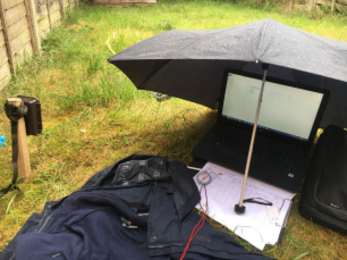 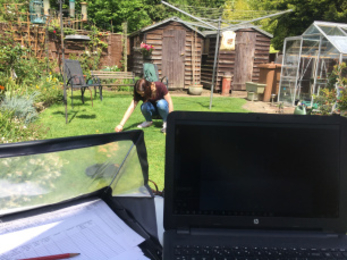 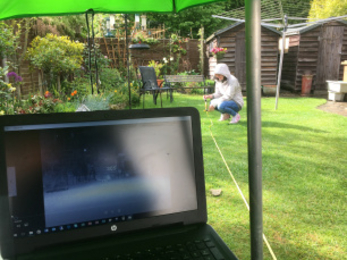 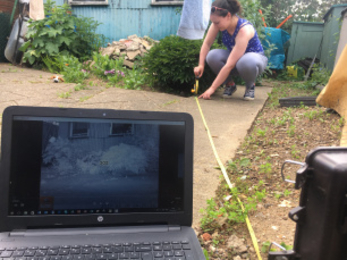 The study is now coming to a close and whilst it’s been a very busy few months, I have to say, I will certainly miss it! Thank you so much for everyone that has been involved and for Nottingham Trent University for including us in the project. Now it’s time to create some large spreadsheets to send over for analysis!