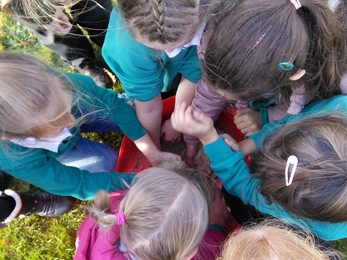 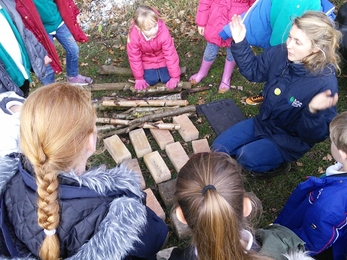 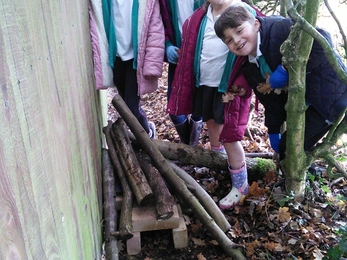 We welcomed two new wildlife ambassadors from year 1 to replace those that had moved to secondary school this year, and split the group into two, with each having a go at one activity before swapping over. Two hedgehog houses were built, and lots of wild flowers sown!

Houses were built in two sheltered locations in which we had located hedgehog footprints earlier in the year, and the perrenial wild flower seeds were sown along a large strip that had been cleared by a JCB earlier in the week. Seeds were distributed in handfulls of sand, and the ambassadors will be ensuring they keep them well watered in the coming weeks. Let’s hope they attract lots of pollinators and bring a real urban buzz to the school grounds! The top layer of grass and soil removed has been heaped in the corner ready for a new project for the wildlife ambassadors – the creation of a large hibernaculum.

Next we carefully arranged bricks, an old roofing tile and lots of logs along two fence lines to create some nesting shelters for hedgehogs. Once the structures were built we gathered lots of fallen oak leaves to make sure the structures were nice and camouflaged. It might be a bit late for hedgehogs to use this winter, but who knows, perhaps it will be found next year! More information about the Urban Buzz project can be found here and tips for helping hedgehogs in the Autumn, here.

Reflecting on my time as Ipswich Hedgehog Officer

With my last days with Suffolk Wildlife Trust approaching, I’ve been reflecting on my time as the Hedgehog Officer for Ipswich.

Ipswich gets artistic for hedgehogs!

Last month we invited the residents of Ipswich to get arty for hedgehogs and they didn't disappoint! By designing and creating an…