Even more scrape creation in the Suffolk Broads...

It's been a busy month for wardens on the north east reserves, without the usual helping hands of volunteers. Its been just as busy for exciting bird sightings, with inspiring stories of birds of prey soaring across Suffolk skies again. Read on for wildlife news from across the Suffolk Broads and to hear about the volunteers that make it all happen.

The watery world of Peto's Marsh at Carlton Marshes continues to draw in amazing bird life and the addition of two new scrapes at Oulton Marshes this winter has improved this watery world further. Recent sightings on the marsh include whooper swans, white-fronted geese, spoonbills, golden plover and ruff, all stopping off at the newly created wetland feeding ground that is Carlton Marshes. Another sighting which we're very excited about is the white-tailed eagle spotted flying north from Peto's Marsh on March 15th. A white-tailed eagle was also spotted in Suffolk on the Blyth Estuary from February 27th to 28th.

White-tailed eagle sightings have been increasing in Suffolk and Norfolk due to a combination of a reintroduction project in the Isle of Wight and expanding populations in the Netherlands and elsewhere across Europe. White-tailed eagles don't breed until they are about 5 years old, until which point they often wander widely before returning to breed near to where they were born or their release site. This means that birds seen locally are wandering juveniles, exploring the world before settling down. The Roy Dennis Wildlife Foundation, which has been reintroducing white-tailed eagles to the Isle of Wight, has GPS tagged all of the birds released and so is able to track them as they explore the UK. One bird in particular left the Isle of Wight for 17 months, flying as far as the North York Moors, exploring Suffolk and spending a long period near the wash. This extensive GPS information shows that the white-tailed eagle seen recently on the Blyth estuary and at Carlton Marshes was not from the Isle of Wight population and is more likely from the population in the Netherlands.

The success of the reintroduction of white-tailed eagles across Europe makes me excited for the potential of our own reintroduction project here in Suffolk. Osprey were once found across the UK, but became extinct in most parts of the country due to human pressures. Suffolk Wildlife Trust now hope to bring this breath-taking bird of prey back to Suffolk with the help of the Roy Dennis Wildlife Foundation, by introducing youngsters to the Blyth Estuary. For more information about this exciting project, find out more here and let us know what you think. 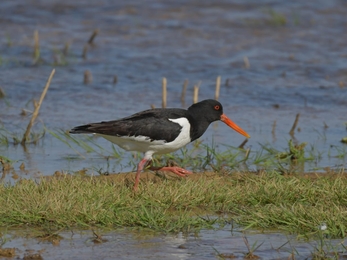 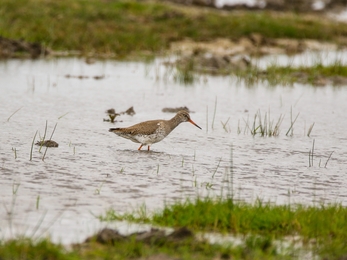 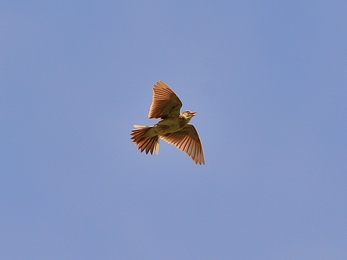 February and March have been busy months for wardens with hedge laying at Lound Lakes, scrape creation at Oulton Marshes, coppicing work at Reydon Woods and now fencing across the reserves. March sees us all hurrying to repair fencing and gates before the cattle arrive on the marshes in April. One of the most exciting jobs for me has been overseeing the creation of two news scrapes at Oulton Marshes this winter.

The northern part of Oulton Marshes is wet through the winter but always dries out very quickly in the spring making it unsuitable for breeding waders such as lapwing, redshank and oystercatcher. To add water to this marsh we have added two shallow scrapes which are connected to the dykes with wide footdrains. This will mean we can keep water on the marsh into late spring, which will provide perfect habitat for feeding wader chicks which need areas of wet mud to find their insect food. It doesn't take long for birds to find these areas, the work was only finished at the end of February and there have already been lapwing, redshank, oystercatcher, snipe and great white egret feeding on the scrape. 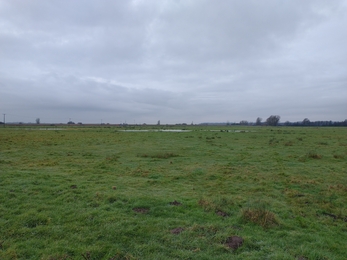 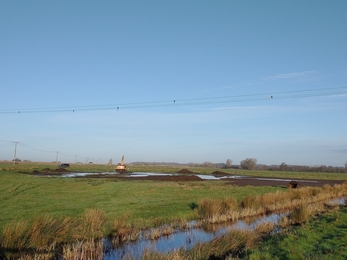 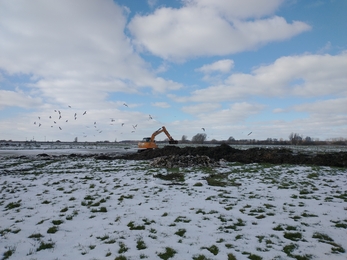 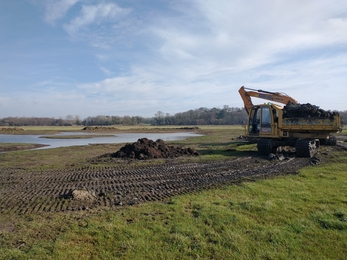 Volunteers are working hard preparing the new centre for its opening to visitors later this autumn. The reserve is also being prepared…