Up close and personal with the fen raft spider

Brought back from the brink of extinction through a project of captive breeding and translocation in Suffolk, these spectacular spiders are now a familiar sight at Carlton Marshes and Castle Marshes.

Fen raft spiders, Dolomedes plantarius, are one of the UK’s largest and rarest spiders, possessing a truly fascinating lifestyle. As their name suggests, these spiders can literally walk on water, and they hunt for invertebrates and even small amphibians and fish both on the water’s surface and underwater. Their body and legs are covered in short hairs which trap air when the spider is underwater, making them appear silver when submerged. As they catch prey by hunting, fen raft spiders do not spin webs like other spider species, however, they do spin large tent-like webs to protect their young. 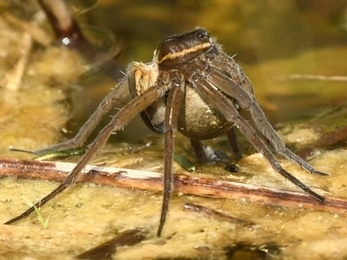 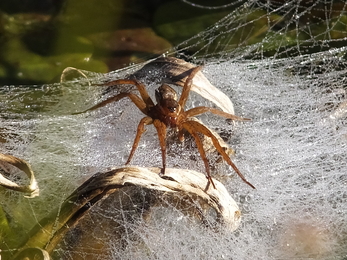 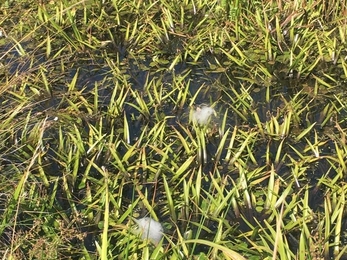 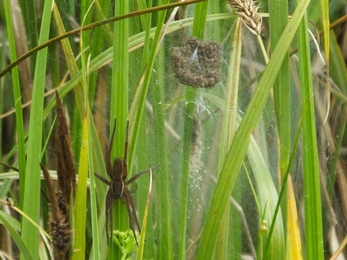 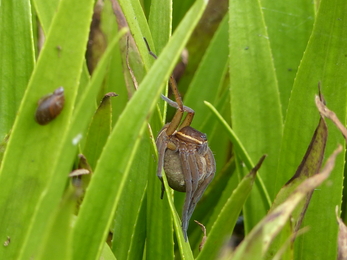 Water plays a vital role in the spiders’ courtship, with the male vibrating his front legs on the water’s surface, moving his abdomen from side-to-side as he approaches the female. When the male and female are very close, they may both bob their bodies slowly up and down before mating. The female lays up to 700 eggs into a large silk sac which she carries with her for 3-4 weeks. When the tiny spiderlings emerge from the sac, the female constructs a nursery web in vegetation near the water. The mother guards the nursery web for about a week until the young are large enough to hunt for themselves. If the spiderlings get blown into the water when they are too small, they can drown as they get stuck to the water’s surface.

Suffolk Wildlife Trust has been safeguarding fen raft spiders and their habitat for many years. Thanks to habitat restoration work, the spiders remain at Redgrave & Lopham Fen, where they were first discovered by eminent arachnologist Eric Duffey in 1956. Following two ambitious projects to captive breed and translocate the spiders with fen raft spider expert Helen Smith, they are now also thriving further down the River Waveney at Carlton Marshes and Castle Marshes nature reserves.

Wildlife documentary film making student James Dunbar has produced a short film on the secret life of the raft spider.

A collaboration between Suffolk and Sussex Wildlife Trusts is helping to save one of Britain’s rarest spiders.

Over a thousand rare spiders released at Carlton Marshes

As the second phase of an ambitious translocation programme funded by the BBC Wildlife Fund, hundreds of fen raft spiderlings have been…