Controlling mink to preserve water voles and other native species

A recent report by the Mammal Society revealed that 11 of our 47 native UK mammals are at imminent threat of extinction, and that includes our much-loved water vole. Habitat degradation and pollution play their part, but one of the biggest threats to water voles is American mink.

American mink were first brought to the UK during the 1920s, mainly to supply commercial fur farms. Through escapees and intentional releases, American mink became established in the UK and were breeding in the wild by the 1950s. Fur farms were banned in 2000 but their legacy still lives on.

Over the years, American mink populations have rapidly increased and they are now common and widespread throughout the UK. Suffolk Wildlife Trust has been co-ordinating mink control throughout Suffolk’s rivers for twenty years and over 3,500 mink have been trapped. The current population in Suffolk is unknown but we feel it’s important to take a more targeted approach and continue monitoring so we can reduce their presence on as many of our wetland reserves and along our rivers as we can.

American mink are ferocious carnivores and pose a considerable risk to many of our native species including the water vole, ground nesting birds such as moorhen, little grebe and coot and our native fish species. Female mink can fit inside water vole burrows meaning they have the capabilities to wipe out whole populations along waterways and wetlands in a short space of time. With continual predation and habitat fragmentation we could see more water voles disappear from our waterways and with already up to 90% declines in some areas, it has become critical to act to help reverse the decline. Water voles have not co-evolved with American mink and therefore do not have the strategies to avoid them. 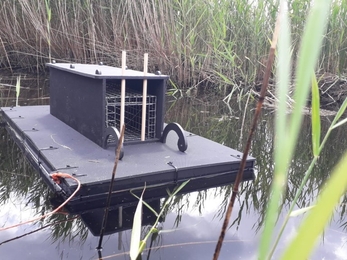 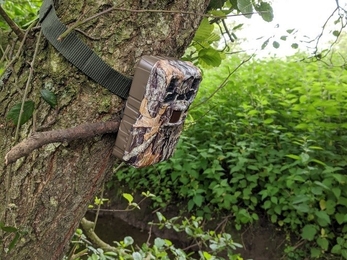 Adding to monitoring efforts already on some Suffolk Wildlife Trust reserves was crucial. We are thankful to Suffolk Coast and Heaths and Dedham Vale Areas of Outstanding Natural Beauty (AONB) for supporting us by granting us funding to create a mink monitoring and trapping programme. Through this funding, eight Browning recon trail cameras were purchased for north east Suffolk, and ten for sites within the Dedham Vale AONB. These cameras produce high quality photos and videos when triggered by movement with the ability to record through the night. Recycled plastic mink rafts were also purchased - the recycled plastic needs minimal maintenance and will last much longer than plywood rafts. Humane mink traps that slot inside the rafts were bought and each trap is fitted with a Remoti device that enables the person monitoring the rafts to be notified by text/email when the trap has been triggered. All this equipment is now up and running on the reserves and rivers and this project will help safeguard not only our water voles but other native species for years to come.

A huge thank you to Suffolk Coasts and Heaths Area and Dedham Vale AONBs for a grant from their Sustainable Development Fund.