Habitat creation complete, hides nearly finished and hundreds of duck already making the most of the mud...

Ellen Shailes
The new hides are nearly complete and the latest downpour has revealed a wetland wonderland at Carlton Marshes. Read on for wildlife news from across the Suffolk Broads, Carlton Marshes habitat creation updates, and to hear about the volunteers that make it all happen!

The torrential rain we saw last weekend has completely transformed Peto's and Share Marsh. Now all the pools, scrapes and dykes that have only recently been finished are brim full with water. This mix of bare wet mud and shallow water across nearly 400 acres has already attracted up to 400 Teal, 100 plus Lapwing, Great White Egret, Snipe and Greenshank, to name a few. As the autumn moves into winter the birds should keep on coming, so make sure to visit over the coming months. With many paths still closed across the reserve until next year, the best place to get a good view is probably the pumping station along the River Waveney.

September and early October is the best time to look out for Osprey on migration to Africa, with a couple seen recently flying over Carlton. The best local spot is the Blythburgh estuary where Osprey were seen for about 8 days this September. These intertidal habitats are perfect for Osprey feeding up before migration. Another beautiful migrant you might see on the Marshes and by the coast at this time of year is the Wheatear. They can be seen hopping along the ground picking up insects, the females with orange colouring and the males blue and grey.

Trail cameras put out on the reserve to record Otter activity have caught footage of an unusual river mammal. A Grey Seal at the pumping station along the Waveney! These cameras have revealed the presence of another mammal which hasn't been seen before on the reserve, the Badger. There hadn't been any signs of Badger recorded at Carlton Marshes until recently, but a Badger has now been caught on one of the trail cameras. Other signs that Badgers have moved in include a torn open Hornets nest, that I found recently in a grass tussock at Sprat's Water. 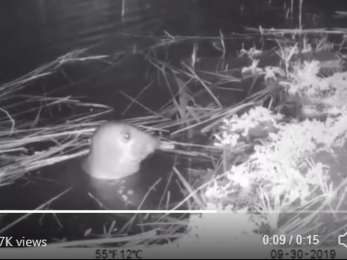 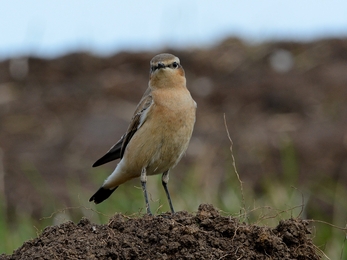 Along with the habitat creation work being finished, the 5 new hides across the reserve are nearly complete, with only a few finishing touches left to add. Standing on the newly constructed 360 degree platform was particularly impressive today, as the recent rain has filled up the scrapes and flooded most of the dykes. From this raised position along the Share Marsh track you are now surrounded by water on every side. You can see another one of the new hides if you head down to Sprat's Water. The tower hide is nestled in the tree line there, 5 meters above the ground. We hope visitors will experience amazing views of Barn Owls, Short-eared Owls and Marsh Harriers from this location. 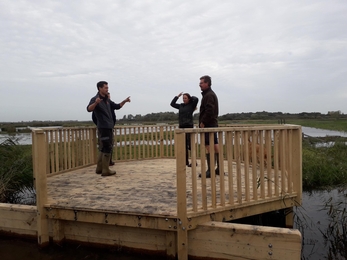 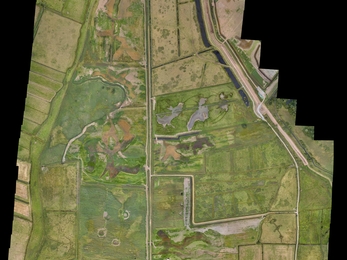 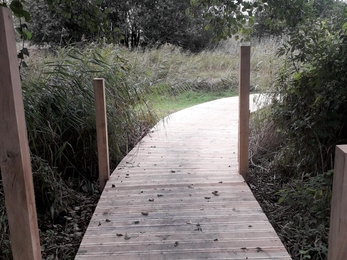 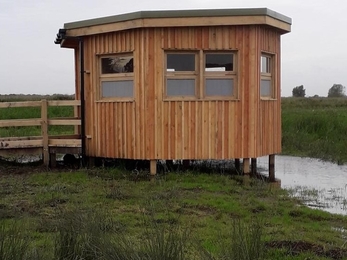 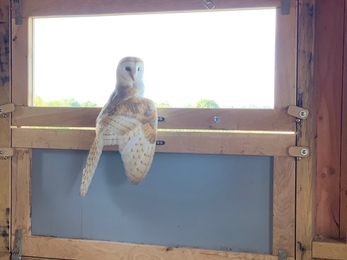 Vince has taken on a large number of tasks as a volunteer, including Fen Raft Spider surveys, water quality surveys and checking trail cameras across the reserves. He told me why he took up volunteering and what he gets out of it.

"In October 2013, aged 52, I suffered a stroke, leaving me with attention deficit, speech, concentration, and memory problems, and overwhelming fatigue. I had been a 60-hour a week GP but now felt my mind was a fraction of what it had been. Remaining symptoms forced retirement. Though I was glad to be alive, I felt lost without my purpose in life. It was during a gloomy period of feeling adrift that I discovered Carlton Marshes. I met Matt Gooch the then Warden and signed up as a volunteer.
I wasn’t sure what I’d like. I tried a working party session but was escorted off the reed beds exhausted after only 2 hours. I tried an education session, but also found this was not for me.
Now in my third year of volunteering, I have settled into studying the small residents of the marshes. I’m now in my third annual Fen Raft spider survey and am starting to see changes and positive spread of the population of spiders there, bred and translocated there by Dr Helen Smith.
Helen has also let me take on some very special behavioural observational studies, to try and help her answer questions she has about the Fen Raft spider. For these I tramp off into the marshes laden with a folding chair, tripod, camera, binoculars and a cold drink, find a web and/or adult, and settle into my chair to observe and write notes for a couple of hours.
Some friends say this research must be incredibly boring -but they completely miss the point. It’s great to be using my brain and observational skills, and to contribute a few bricks to the huge and growing edifice of scientific conservational knowledge. It’s very peaceful, a far cry from the manic working life I once had.
I write up the day’s work and publish it in my wildlife blog www.docdoolittle.blog, head to the Fen Raft spider behavioural studies section. I’d be really pleased if you hit the “follow” button and stay in touch.
There’s lots to look forward to with the current expansion work. I’ve been sounded out for involvement in reed propagation for future wetlands, and who knows where the Fen Raft spider research will lead."

Life in lockdown has been difficult for many of us, but wildlife at Carlton Marshes has been thriving. Returning to work after weeks…

Appreciating the wild Suffolk around us in our gardens, hedgerows and roadside wildflower meadows. Read on for wildlife news from across…