Our Reserve Wardens have been taking a closer look at plants found on our reserves that are firm favourites with pollinator species this week. Lots of invertebrates have been spotted too including a pink grasshopper which gets its colour from an uncommon mutation.

Wood sage, a firm favourite with our pollinators

Warden Joe Bell-Tye has been snapping some fabulous wild flowers on some of our west Suffolk reserves. Wood sage, Teucrium scorodonia, has delicate pale yellow flowers with leaves that resemble sage but without the powerful aromatics. Upright spikes of straw-coloured flowers can be seen from July to September and its plentiful seed provides food for many birds. Bees, wasps, beetles and butterflies all feed from wood sage and it appears to be growing very happily at Wangford Warren on the dry, sandy soils.

What’s yours is mine

Common cow-wheat, Melampyrum pratense, is a root-hemiparasite which means that it relies on obtaining some of its nutrients from the roots of nearby plants. You can see its deep golden flowers at Arger Fen from May to September. The nectar of common cow-wheat can only be reached by insects that have a long proboscis, especially bees. It is the larval foodplant of the rare heath fritillary butterfly.

Fox-and-cubs… of the floral kind

The vibrant sunburst orange of fox-and-cubs, Pilosella aurantiaca, looks like it belongs in an exotic garden, and indeed it is a garden escapee introduced to the UK from alpine regions of Europe by 1629, so it’s now well naturalised here. Bees and other pollinators love it for its rich source of pollen and nectar.

Many of our reserves provide suitable habitat for dragonflies and damselflies and now is good time to go searching. Charlie McMurray, Reserve Assistant at Sizewell Belts, photographed one dragonfly species you are likely to find across our county.

Both sexes of the four-spotted chaser are golden-brown, getting darker towards the tip of the body, and with yellow spots along the sides. Two dark spots at the front edge of each wing give this medium-sized, fairly broad dragonfly its name and an easily recognisable appearance.

It is on the wing from May to September, sometimes even into October and is found throughout the British Isles at the margins of shallow ponds and lakes which have good emergent vegetation and some open water.

Four-spotted chasers are active dragonflies, spending a lot of time hawking over water for insect-prey or to mark out their territories. They mate on the wing; the female then hovers over the water, dipping the tip of her abdomen into the water to drop her eggs on to vegetation below the surface.

The sound of summer

The common field grasshopper evokes the sound of summer, as gregarious males serenade females by rubbing their legs against their wings to create a 'song'. The females respond to the males with their own song. After the exchange, if the female is suitably impressed by the male, she will allow mating to take place. After mating, she will lay the fertile eggs in soil ready to hatch the following summer.

The male is smaller than the female, ranging in size from 1.8 cm to 2.4 cm. Females have a variety of colours from greens, browns, greys and stunning pink (as pictured, taken by our Lound Lakes Warden, Andrew Hickinbotham, show). Males are mottled pale brown, with vertical barring on their sides, a perfect camouflage for hiding in open sunny grassy areas, so if you have a lawn in your gardens, why not have a look for these and, even better still, why not let it grow long for them to thrive in.

A first for the fens

These spectacular Norfolk hawker and ruddy darter dragonflies were recently snapped at Redgrave & Lopham Fen by keen naturalist Wilum Johnston. Also spotted was a crab spider feasting on a ringlet butterfly and a silver-washed fritillary butterfly – the silver-washed being a first for Redgrave and Lopham Fen this summer! 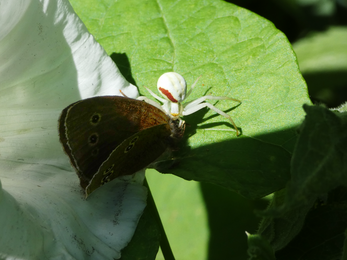 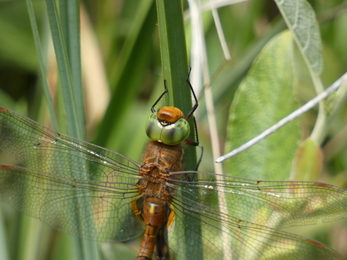 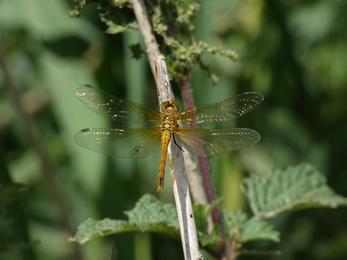 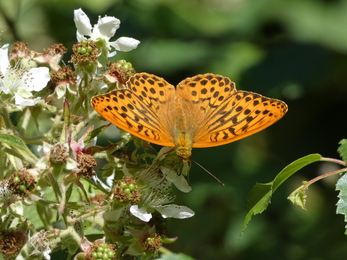 It's been a floral affair this week with our Reserve Wardens highlighting some of the wonderful flora out on our sites. From…