This week our Reserve Wardens spotted caterpillars sporting mohawks, a lesser stag beetle and some beautiful wetland plants and birds.

Two moth caterpillars with impressive hairdos have been seen this week at Sizewell Belts.

The vapourer moth caterpillar is grey, black and red, with tufts of yellow hairs running along the back and two black tufts at the front. Male vapourer moths fly by day and have orange/brown wings. Females are buff-coloured and almost wingless; they cannot fly and attract males by giving off pheromones.

The pale tussock moth caterpillar is striking bright green in colour with black bands between its body segments, yellow/whitish hairs, a row of yellow tufts on top and a red tuft at the rear. The resulting moths are pale in colour and have forward-facing furry legs. The male moths are darker and smaller than females and have feathered orange-brown antennae. 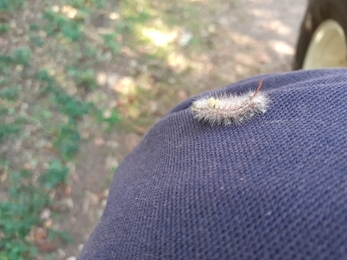 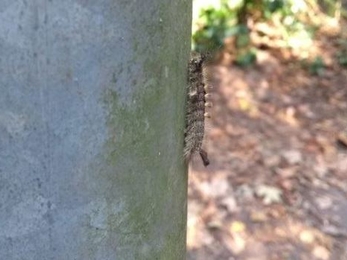 Amphibious bistort is a native aquatic plant which will grow in deep, still or slow-moving water, just like that found at Lackford Lakes. These pretty pink flower spikes are held above the water from June to September and provides a good hiding place for larvae and basking sites for adult dragonflies.

Creeping stems of Persicaria amphibia produce flowers in dense spikes that stand upright to a height of 15 to 25cm in water and 40cm plus in boggy margins. Each little flower is typically just 3 to 4mm long and has five pink petal-like segments and five protruding stamens. In the shallow margins of ponds and lakes, amphibious bistort creates a wonderful flush of colour which often encroaches onto the shore, where its leaves become elongated rather than heart shaped as they are in water.

Joe Bell-Tye, West Suffolk Reserves Assistant, spotted this lesser stag beetle in one of the small woodland areas at Lackford Lakes. Joe says ‘It may be smaller than its famous cousin, but it is still a relatively large beetle with formidable jaws. Adults can be found in woodland, parkland and hedgerows and, like this one, can often be seen resting in the sun on tree trunks. The larvae depend on old trees and rotting wood to live in and feed on, and both adults and larvae can be found in the decaying wood of ash, common beech and apple. It can be distinguished from the male stag beetle by its smaller jaws and distinctively knobbed antennae, and from the small-jawed female stag beetle by its all-black wing cases.’

Since the tidal surge of 2013, Hazlewood Marshes has transformed into one of the largest unmanaged inter-tidal habitat creation projects in the UK and its fascinating change from fresh water grazing marshes to salt marsh is one of Suffolk’s best kept secrets. Nestled alongside the river Alde, it is a fantastic place for birdwatching, boasting majestic spoonbill along with huge flocks of black-tailed godwits and dunlin. Redshank, little grebe, little egret and avocet can be seen here all year round and the briny waters ring with many species of duck calls. Recently an osprey has also been seen at Hazlewood, fishing on the estuary as it makes its journey south on migration. 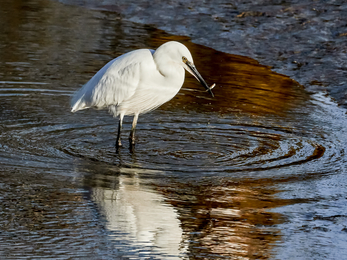 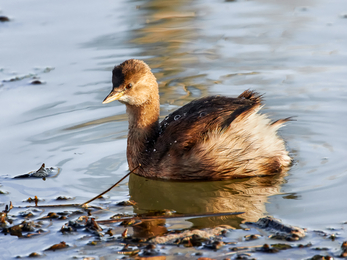 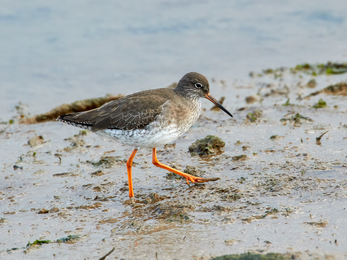 Devil's-bit scabious, found here at Thelnetham Fen, is in the teasel family and like its relative, it is rich in pollen and nectar. It is popular with bees, moths and butterflies, especially the marsh fritillary butterfly and the narrow-bordered bee hawk-moth.

Debs Crawford, Valley Fens Warden, says, ‘It gets its Latin name - 'Scabere', meaning to scratch, from its traditional use as a treatment for skin conditions, such as scabies and the sores of bubonic plague. Its common name arises from the fact that its roots look truncated, as if bitten off, legend has it, by the devil. My favourite name for it, however, has to be 'bobby bright buttons' which exemplifies how it appears adorning the fen at this time of year.’

This week even more fantastic fungi has been on display at our nature reserves, and Hen Reedbeds had a makeover.

This week our Reserve Wardens have seen ivy bees, a starling murmuration, a little owl and a gorgeous September sunrise.