This week, we’re searching for gold in the form of our natural wonders – violet ground beetles, bugle and yellow archangel and the wondrous scents of bluebells in our woodlands.

Warden Steve Hook was excited at the prospect of finding natural gold in the form of our lovely Foxburrow Farm reserve this week. He’s definitely found the sheep!

There’s a tiger in the heath...

The Green tiger beetle is a common ground beetle of heathland, moorland, sandy grassland and sand dunes. Often seen in bright, sunny conditions during the spring and summer, the green tiger beetle is a fast, agile hunter, running across the ground to catch its invertebrate prey, including spiders, caterpillars and ants. It is well-equipped to tackle its prey, with a ferocious set of jaws and long legs that give it an impressive turn of speed (it is one of our fastest insects). This one was spotted by Warden David Stansfield on Blaxhall-Tunstall Link.

We really are being given such a treat this spring with bountiful spring flowers. Ellen Shailes found this lovely marsh valerian at Oulton Marshes with its delicate spray of pink flowers. Jamie Smith has been enjoying the wonderous sight and scent of the bluebells at Reydon Woods, sprinkled with yellow archangel, bugle, celandines and greater stitchwort. The bluebells are also putting on a great show at Captain’s Wood, as this photo from Andrew Excell shows. 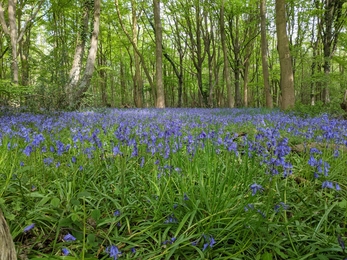 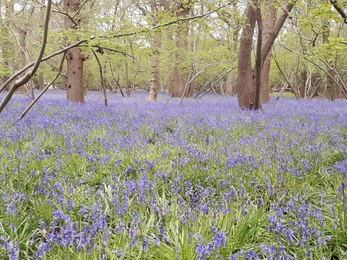 Jamie Smith spotted this amazing spider-hunting wasp (Anoplius viaticus) at Blackheath, next to our Church Farm Marshes Reserve this week in between the rain showers.

There are two very similar species of violet ground beetle. Carabus violaceus is the more common of the two beetles, found in gardens, meadows and farmland. Carabus problematicus is slightly less common, favouring woodland and heathland, though it can sometimes be found in gardens.

Rather than being a ‘problematicus’ ground beetles are active, nocturnal predators, chasing and catching smaller invertebrates; they are particularly helpful to gardeners as they prey on many 'pest' species, such as slugs. They can often be found resting during the day under logs and stones and in leaf litter. Adult females lay their eggs in soil and, when the larvae hatch, they become active predators themselves. There are hundreds of species of ground beetle in the UK, which can be found in almost all habitats. One of the rarest is the Crucifix Ground Beetle (Panagaeus cruxmajor, a Priority Species under the UK Post-2010 Biodiversity Framework), which was rediscovered in Cambridgeshire in 2008 after a 50-year absence in the area.

This violet ground beetle was found at Knettishall Heath by Warden David Stansfield.

The reed warbler is a plain, unstreaked warbler. It is warm brown above and buff coloured underneath. It is a summer visitor that breeds in the UK, with the largest concentrations in East Anglia and along the south coast. Knettishall Warden, David Stansfield, captured its melodious warbling this week on the heath.

As practical woodland management takes a back seat during the spring and summer months, so the Bradfield Woods National Nature Reserve Team begin to start processing the coppiced products into useful products. The bulk of felled timber is turned in to high quality firewood which is distributed to local residents in the area, with funds raised supporting the nature reserve’s running costs.

Our week of weather in Suffolk has certainly been changeable to say the least and has brought with it some spectacular cloud formations. With our wide-open views of skies, we like to think of it as billowing celebratory flags framing our view of the world and casting moods both far and near to remind us how exhilarating our seasons can be.

The latest news from our reserves. This week - a linnet melody, a cockchafer, cream tiger moth, a large bee-fly and lots more wonderful…

The latest news from our reserves, this week a fresh Norfolk hawker, a pair of black-winged stilts, our reserves got a spruce-up and we…

Weekly wild news from our reserves - 28 May

The latest news from our reserves, this week soaring swifts, cows on the move, a swarm of bees, an owl mystery solved and a nest in a…