Scrape creation work has been full steam ahead at Oulton Marshes this week, culminating in Matt Gooch, North Suffolk Sites Manager, filling the scrapes with water. These scrapes will provide lots of shallow edges which are important feeding habitat for waders such as lapwing and redshank. We look forward to watching the wildlife flock into these new habitats.

Jamie Smith, North East Suffolk Warden, has done a top job cutting parts of Hen Reedbed using the Softrak this week. The reserve has developed some lovely mossy, peaty humps, which are fantastic habitat for a large range of tiny invertebrates such as springtails. Peat also plays an important role in the fight against climate change as it soaks up carbon, preventing it from getting into the atmosphere. We are excited to see the botanical diversity appearing in the coming year as well as specialist moth species that exploit these more open areas. 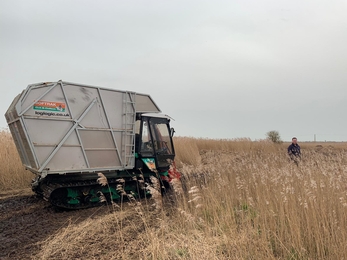 Jamie Smith with the Softrak at Hen Reedbeds – Sarah Groves 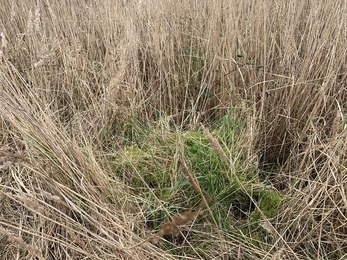 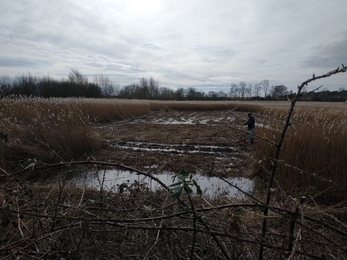 New view from the path at Hen Reedbeds - Jamie Smith

This inedible fungus with a historic namesake is common in broadleaved woodland, and the fruiting bodies are small, hard, rounded balls which grow on dead trees. Joe Bell-Tye, West Suffolk Warden, spotted these specimens at Lackford Lakes. Joe said ‘Legend has it that the Anglo-Saxon King Alfred, while escaping war in one of his country homesteads, was being sheltered by a peasant woman – and was put in charge of removing her baked cakes from the oven. Unfortunately, he fell asleep and did not remove the cakes which were subsequently burnt. The fungus - which has the appearance of burnt buns - takes its name from this story.’

The other name for King Alfred’s cakes is cramp balls. This originates from the tradition that carrying the fungus in your pocket would help prevent cramp. Also named coal fungus due to their historic use as fire starters.

Fairer weather this week meant drier access to parts of Redgrave & Lopham Fen. Contractors and staff cleared encroaching vegetation and tree species which, if left, will out compete the rare ground flora and fauna found on which the status of the Fen depends. Richard Young, Fen Warden, said 'it is a constant task each winter to open up new areas whilst providing a range of scrub and woodland edge habitat that will benefit the wildlife we seek to encourage.’ Cleared timber is chipped on site and then sold to visitors at the centre for gardens and allotments. Richard requests local people get in touch to organise collecting chippings in their own bags.

Jamie Smith, North Suffolk Warden, spotted this clear sign of badger presence at Dingle Marshes this week. Badger prints have a bean-shaped palm pad, very large compared to the size of the toes. The toes in front of the pad will be almost aligned and the front paws leave a distinctive claw mark. Be aware that badger tracks can be deceptive: they have five toes, but sometimes the fifth toe doesn’t print.

This time of year is ideal for hedge management, as trees and shrubs are dormant, and birds have not yet started nesting. This week the teams have been busy coppicing and laying hedges across our nature reserves. Hedge laying involves partially cutting into and bending over the main hedge stems at ground level, which encourages the trees to regenerate, thus extending the life of the hedge. Andrew Hickinbotham, Lound Lakes Warden, did an excellent job of laying the hedge at Lound Lakes this week (see before and after photos below). Coppicing hedges is a good option when the hedge is too mature for laying, or there are too many gaps. Charlie McMurray, Trimley Marshes Warden, also did a top job of coppicing the mature hedges at Trimley. Well-maintained hedges provide a wildlife haven for small mammals, reptiles and birds by providing a variety of different structures and habitats. 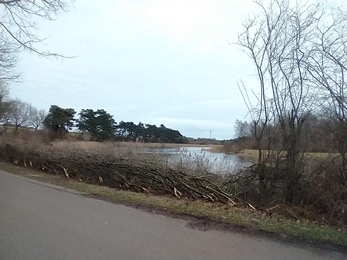 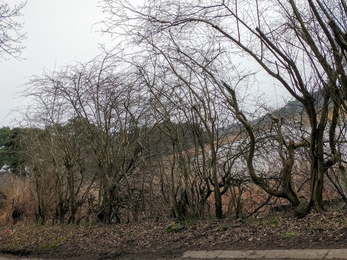 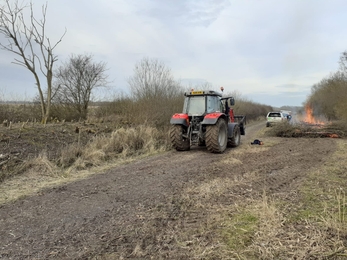 With this week’s announcement from the Government to slowly relax social interaction restrictions over the next few months, the Trust is busy planning for future events to fit in with Covid 19 guidelines. Our Wild Tots and Wild Babies groups are likely to be offered first, although looking at our rather damp platform at Redgrave & Lopham Fen, pond-dipping is unlikely to be an activity for a week or two yet!

The latest news from our Reserve Wardens. This week: reptiles warming up, a night time fox, bounding otters, a rare brook lamprey and…

The latest news from our nature reserves; this week, a white-tailed eagle, flowering fritillaries, firebugs, mating toads and lots more…

Catch up on the latest news from across our nature reserves, this week spring is in full swing with birds, butterflies and wildflowers…