It's been quite a week with a bee species new to east Suffolk being discovered and all hands on deck to help a rather adventurous roe deer!

The bee species, Nomada striata, has been discovered at Newbourne Springs Nature Reserve this week by Steve Babbs. This is the first ever record of the species for east Suffolk, with only a couple of previous records for the west of the county. It is a rather small, predominantly red Nomada bee with yellow spots on the abdomen. Adrian Knowles, bee recorder for Suffolk, said ‘it is not a common bee but very occasionally quite numerous where found, being widely but very locally distributed throughout much of Britain as far north as Elgin in Scotland.’

Nomada striata does not collect pollen but instead is a cleptoparasite of another bee, Andrena wilkella. It is known to visit bulbous buttercup, white bryony, bell heather, raspberry, wood avens, bird’s-foot trefoil, wood spurge, bogbean, germander speedwell, ragwort and dandelion and can be found in flower-rich grasslands, woodland on clay soils and the coast.

The slow-worm is neither a worm nor a snake, but is, in fact, a legless lizard - its identity is given away by its abilities to shed its tail and blink with its eyelids. The slow-worm is much smaller than a snake and has smooth, golden-grey and coppery coloured skin. Males are paler in colour and sometimes sport blue spots, while females are larger, with dark sides and a dark stripe down the back. Slow worms hibernate for the winter months, usually being active from March to October. Our work at Lackford Lakes ensures there are plenty of habitat for them to hunt in the summer months and hibernate throughout the winter.

Easily overlooked due to its tiny flowers, fairy flax is a delicate low-growing plant of dry grasslands, sand dunes and grassy heaths. The pretty white flowers have five petals, which droop over and appear to be nodding when in bud. Fairy flax is also known as 'purging flax' and was historically used as a laxative by herbalists. Over the recent years, we have seen the diversity of wildflowers going up in the areas we are wilding on the reserve, helping many more insect species.

In a joint rescue with Suffolk Fire brigade and the RSPCA, we were called to action by Trust volunteer Kevin Martland and a member of the public to help free a roe buck that had become trapped in the mud at Oulton Marshes on Wednesday 29 July.

Roe deer aren’t a common sighting at Oulton Marshes, the last record was in 2008. Roe deer normally prefer the cover of woodland and field margins. The smaller, marsh savvy Chinese water deer are commonplace in the marshland of the Waveney Valley, with muntjac deer regularly venturing across grassland, whereas roe deer stick to the firmer ground.

The largest native deer species is the red deer. Although present on Suffolk and often found on across a number of different habitats from heathland to reedbeds, these are vagrants passing through Carlton and Oulton Marshes.

Make hay while the sun shines

As we all dash to the hairdressers to have our lockdown locks cut, Darsham Marshes fen meadow received a similar treatment. Jamie Smith, Coastal Reserves Warden, and his trusty band of Suffolk Wildlife Trust volunteers worked in small teams to ensure social distancing was maintained. The team was able to cut, spread and collect the cuttings this week. The fen meadow is species rich and by cutting and spreading the green hay, the team are able to manually transfer the seeds to speed up the natural process of  dispersion to the surrounding meadows. Over time we have been able to increase the plant diversify and sources of nectar for insects. 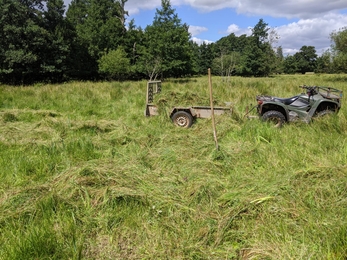 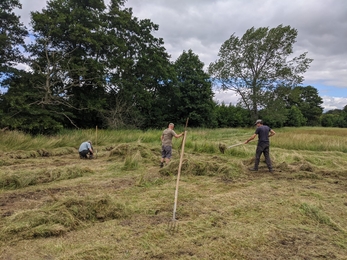 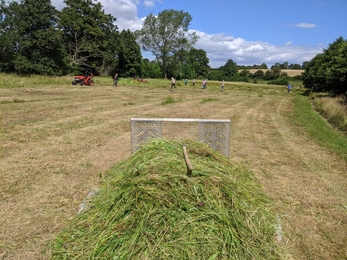 This week saw more wintry scenes, our brilliant volunteers returned to Redgrave & Lopham Fen, and the Konik ponies were engulfed in…