This week we've had some fabulous fungi continue to pop up and pepper our reserves and our Reserve Wardens have enjoyed listening to bearded tits and finding grass snakes whilst carrying out species surveys.

An amazing array of fungi continue on our reserves

Amazing fungi are popping up across our western nature reserves such as this bay bolete, Imleria badia, found at Knettishall Heath. Whilst this fungi is fairly common, it’s rare to find more than two or three in a group. The common name 'bay' refers to the colour of the cap which is a bay brown (chestnut) colour.

Whilst cap colour helps to identify some fungi, it is of little help when identifying the blusher fungi Amantia rubescens, which was also been seen at Knettishall this week. These large and very common fungi vary from almost white through various shades of pink and brown to almost black. However, there is something about blusher fungi that betrays its identity to anyone who has seen them before as they blush when bruised or cut.

Our third and final fungi of the week is the parasol mushroom, Macrolepiota procera, which are saprobic, meaning that they colonize rotting wood and dead organic matter found in the soil. They are most common in woodland clearings and in grassy areas next to woodland, growing alone or in small scattered groups. 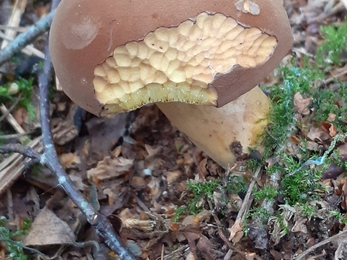 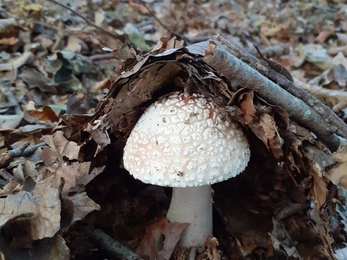 As part of our learning and survey work across our nature reserves, we leave out tin sheets or carpet tiles where wildlife hide up for shelter and warmth. Uncovering one such sheet this week we found a beautifully-patterned grass snake, the UK's largest snake, growing to well over a metre in length. Joe Bell-Tye, West Suffolk Reserves Warden says, “grass snakes are non-venomous and are extremely timid, moving off quickly when disturbed”. If cornered they can feign death, and if handled, produce a foul-smelling excretion. They are typically grey-green in colour and have a distinctive yellow and black collar around the neck, with black bars down the sides of the body.’

Grass snakes are Britain’s only egg-laying snake with the females laying eggs in June or July, normally in rotting vegetation (including garden compost heaps) which acts as an incubator with eggs hatching in late summer. Feeding primarily on fish and amphibians, grass snakes can occasionally venture into garden ponds in the summer months.

Assistant warden Daniel Doughty recorded the distinctive ‘ping-ping’ call of bearded tits at Hen Reedbeds this week. The male bearded tit is cinnamon brown with a long tail, and a black ‘moustache’ . Females are less colourful and lack, some might say, rather luckily, the moustache. Also known as 'bearded reedling' or 'bearded parrotbill', bearded tits nest low down in the reeds on piles of dead reed stems, feeding on insects and reed seeds.

This week even more fantastic fungi has been on display at our nature reserves, and Hen Reedbeds had a makeover.

This week our Reserve Wardens spotted caterpillars sporting mohawks, a lesser stag beetle and some beautiful wetland plants and birds.…

This week our Reserve Wardens have seen ivy bees, a starling murmuration, a little owl and a gorgeous September sunrise.